Slip and Slide in D.R. Congo!

Here is an update from Mike and Amy Boomer, our mid-termers involved in a 12 month ERDO micro-finance project in DRC ... Check it out!

Amy just got back from a trip to Uvira. The sad thing is that she didn’t just bring her lovely self back, but some kind of parasite that decided to make its way into her body. After 3 days of dealing with it, it got to be too much and we decided that it wasn’t just a normal bug and that we should get some tests done. She wasn’t up to going to the hospital and waiting in the less than desirable conditions, so we took some ‘samples’ on our own at home, Amy drawing her own blood and other things. It became my job to transport them. The ironic thing is that this just happened to follow the two wettest days we’ve had down here so far.

I was going to catch a motorcycle, but I stopped one and asked, he told me no way too muddy. Must be serious I thought, I’ll take our car. The road to the hospital is about 20 mins on a good day and rough on its own given the crazy traffic at the roundabout called Essence, but on this day it was the craziest, muddiest thing I had ever seen. 4 wheel drive all the way.

I slipped and slid my way through Essence, where I saw a motorcycle get hit by a car right in front of me. The car was working to get unstuck out of the ditch when he finally got traction and bumped into the back of the bike causing him to crash into a semi-stuck oncoming car climbing the slowly sloping hill. The guy on the back with the machine gun seemed none too happy. But after a few minutes of yelling everyone was on the move again, including me. I was heading to Panzi Hospital, but for the best hospital in town with a ton of international staff, the turn off the main road towards the hospital is obscured by roadside sellers and has no signage at all. I’ve only been there once, so the combination of mud, which feels like snow to drive on, peoples roadside shops, and my directional ineptitude, caused me to miss the turn. I ended up going the back way, a far worse road which had 2 options, straight down the hill which was blocked by a giant truck stuck in the ditch sticking across the road. I found this out only after I got there and made a slippery turn around and climbed back to opI’ll admit, the car has been cleaner.

As they say ‘matope mingi’ lots of mud!tion 2. As small turn down an equally slippery road. I got around one Lowry stuck in the ditch, only to find a second that was trying to dig himself out, that completely blocked the road. The only option double back look for the main turnoff that I missed.

Climbing the slope the car fishtailed at 5km per hour, but I managed to keep calm. When asking for directions I met two medical students on the way to the hospital and asked them if they wanted a ride, but what I really wanted was directions. On the way to the main road, I put the drivers side tires in a small ditch to guide us passed another truck in the ditch, to get by without sliding into him. Eventually with no more major setbacks we made it to the hospital. I dropped of the tests and could wait for the results back at home.

The way home was faster, but none less eventful. First I watched a motorcycle and his passenger slip in the mud beside me and do a faceplant in the muck at about 20km/hr. They were fine, but everyone around was laughing. To think I was hoping to take one. When I got back to Essence traffic was at a standstill. After a few seconds I figured out it was because there was a guy herding his cows through the busiest road in Bukavu. The cattle weren’t moving because they were surrounded by cars and spooked. Eventually one of them hit my car with his horn, but not before I snapped a few pictuThis guys is a split second away from ramming his horn into the front fender. He didn’t do any damage though...res on my phone. Cars jockeyed and eventually the cattle got through. The rest of the trip home was uneventful, minus the two police who stopped me to ask for money.

All said and done, Amy’s test came back and she has some type of African parasite, but clear for anything major. She is just taking some antibiotics and recovering slowly, but well. As for me, I had the adventure of a lifetime. 4x4ing in the mud, cow attacks, motorcycles crashing, samples delivered. Mission accomplished!

Asante sana, (Thank you very much) 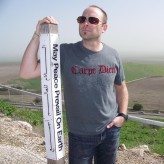